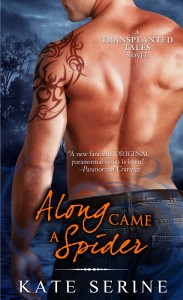 When Trish Muffet is attacked at a grisly crime scene, the last person she expects to come to her rescue is Nicky “Little Boy” Blue. But since walking away from everything two years before, Nicky’s been doling out vigilante justice as “The Spider,” taking on the vicious predators of the night in hopes it’ll lead him to his ultimate target—Vlad Dracula. And he needs Trish’s help.

Although Nicky’s renegade style goes against everything Trish stands for, she’ll do what she must to bring Dracula down. With danger stalking her, Trish knows the only person she can count on is the one man who has the power to leave her breathless. There’s no way she’s letting this spider frighten her away. . .

Praise for Along Came a Spider

“It’s not often that something totally new and entertaining comes along, but Kate SeRine doesn’t disappoint with Red. I definitely recommend this to readers who want humor, drama, suspense, and a truly entertaining, ‘feel good’ romance.” —Kate Douglas

“Plenty of romance and action to mix up the excitement.” —Top Pick from The Romance Reviews, 5 Stars

“A bit of paranormal romance, a bit of urban fantasy, and all awesomeness, the Transplanted Tales series offers readers everything they could possibly ask for – creative storytelling, action and humor, fantastic characters, and a world you will return to again and again. You simply MUST read it!” — The Rabid Reader

I glanced around, searching frantically for some escape, but it was useless. Unless I suddenly discovered some latent ability to leap tall buildings in a single bound, I was well and truly hosed. I pressed my lips together and squared off. If I was going down, I wasn’t going to make it easy. They’d have to earn my blood.

She leaped forward like she was on a spring. My eyes went wide, my courageous last stand suddenly not such a brilliant idea. But a split second later, she jerked back with a screech, her hand clawing at a small black arrow lodged in her shoulder. I heard an answering screech from the brunette and swung around in time to see her head snap back as an arrow pierced her eye.

There was a scuffling noise behind me that brought my head around in time to see the blonde struggling with a figure dressed in black fatigues and wearing a black ski mask. As I watched, he swung his fist, catching her jaw with a right hook, then slamming her chin with a left uppercut that knocked her on her ass. In the next instant, he had a knee on her chest and snatched from his ammo belt something that looked like a railroad stake. The blonde didn’t even have time to react as he drove it down into the center of her chest.

I hadn’t even realized I was holding my breath until it burst from me with a gasp. But my relief was short-lived. An arm came around my throat, cutting off my air. I drove my elbow into my attacker’s ribs, but it barely fazed her. I grabbed her arm and tucked my chin down to take some of the pressure from my esophagus, then drove the edge of my snow boot down along her exposed shin, making her howl in pain.

My eyes darted toward the sound of the man’s voice. He stood over the body of the blonde, a small crossbow aimed at the brunette. I bit down on the vampire’s arm as hard as I could, drawing her tainted blood. When she roared with rage, her grip loosening for a fraction of a second, I dropped, rolling out of the way as the man in black fired the crossbow. The arrow struck the center of the woman’s chest. Her eyes went wide for a fraction of a second before she crumpled into a permanently dead heap.

So this was the infamous Spider…

I totally took back everything I’d said about the guy being no better than the criminals he brought down. He was my new BFF. I was tempted to see if he was a bit parched after the ass kicking he’d just doled out and maybe wanted to join me for a super stiff drink at Ever Afters, but then the mind-numbing pain in my wrist reminded me I probably had other business to tend to first.

Out of breath, I scooted myself back with my good arm until I could lean against one of the dumpsters. My adrenaline left me in a rush, and I was suddenly completely exhausted. I closed my eyes and let my head fall back against the dumpster.

My eyes snapped open, my stomach clenching painfully. There was something so familiar about that voice. . . . “What?”

My rescuer squatted down in front of me. “Are you all right?”

I blinked at him, suddenly experiencing a serious case of déjà vu. The man’s tone was rough, clipped, and there was no hint of mischief or roguish charm. Still . . .

“My wrist is broken,” I said a little breathlessly. “But it’s already healing. I’ll be fine by tomorrow.”

He gave me a tight nod and started to rise, but then seemed to reconsider and resumed his crouch before me. He studied me for a long moment, giving me a good glimpse of his eyes, but they were in shadow, obscuring the color, and he was completely on his guard. There was no way I was getting in.

“You did good, doll,” he said finally. “Made my job one helluva lot easier.”

I felt my cheeks going warm at the praise. “Thanks.”

His eyes narrowed, crinkling a little behind his ski mask and giving me the impression that he was grinning. “But you know, you shouldn’t be out here alone at night, even if you can kick ass,” he admonished. Then he reached up and twisted one of my ringlets around his gloved index finger and pulled gently before letting it spring back into place. “I’d hate to see harm come to a girl as pretty as you.”

My eyes went wide. Holy shit. “Nicky Blue?” I gasped. “You’re the Spider?” He jumped to his feet and took a few quick steps before I found my voice to cry out, “Wait! Nicky! It’s okay—I know you!”

He halted midstride and shook his head. “No, you don’t,” he said over his shoulder. “No one does. Not anymore.”

Band of Skulls (The Devil Takes Care of His Own; Blood)

The Black Keys (Gold on the Ceiling)

The Maine (My Heroine; I Must Be Dreaming)

The Killers (All These Things That I’ve Done)

Queens of the Stone Age (No One Knows)

Snow Patrol (Make This Go On Forever*; Set the Fire to the Third Bar*)

Evans Blue (Show Me; Cold; Say It; Erase My Scars)

Parachute (She Is Love*)