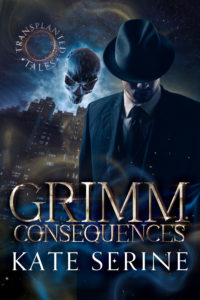 Saying Nate Grimm has a dark past is an understatement. Fortunately, no one’s bothered to look too closely at the Fairytale Management Authority’s lead detective and part-time Reaper. And that’s the way Nate wants to keep it. For after centuries of torment and loneliness, he’s finally found happiness with the hot and hard-charging love of his life, Tess “Red” Little.

Of course, his love for Tess is the reason there’s a posse of Reaper judges after him, led by a sadistic bastard acquainted with Nate from once upon a time. Now, Tess will pay the price for Nate’s transgressions unless Nate severs his ties to the transplanted Tales–and Tess–forever. His enemy has the advantage in speed, malice and brutality. But the Reapers have underestimated the depth of Nate’s love and devotion. And the fury of his wrath. . .

“I can’t get enough of this amazing paranormal series!” —Paranormal Cravings

“One hell of a story.” —The Romance Reviews

“Not to be missed!” —The Demon Librarian, 5 Stars

“I can’t get enough of the Transplanted Tales. . .” —The Romance Reviews

I folded a stick of gum and shoved it into my mouth, needing to chew on something other than the dread that was choking me. Tess glanced my way with her patented saucy grin, which did little to abate my anxiety. That grin meant she was about to do something reckless—and was planning to enjoy it.

“Stay here,” I mouthed, jabbing my finger at the ground. I started to get up from behind the wooden crates that so far had hidden us from the quarry we’d tracked to a warehouse in an industrial complex about ten miles from the Asylum.

She grabbed my sleeve and pulled me back down, giving me her “you’re fucking crazy if you think I’m going to go along with that shit” look. I’d come to know it well. And I’d been seeing it a lot more since I’d saved her life from a psychotic sorceress a couple of months earlier. Lucky for me, with our mark just a few feet away, Tess couldn’t launch into the usual lecture on how she was a big girl and didn’t need me hovering over her like some overprotective—although admittedly dashing—guardian angel of death.

She could lecture all she wanted, though. There was no way in hell I was going to let her get herself killed. “Fine,” I mouthed. “Together.”

She rolled her eyes but then gave me a terse nod as she palmed the gun strapped to her thigh. And then lunged out from behind the crates.

But she was already out of earshot, her cherry red combat boots pounding the concrete floor of the warehouse as she chased down the son of a bitch who’d had the bad luck to have us on his tail. I heard Tess fire off two quick rounds. There was a roar of rage in response as the bullets struck home.

I caught a glimpse of Tess’s black leather trench coat flying out behind her as she took a sudden left. She was completely out of my sight now, and I didn’t like it one damned bit. I shot forward, dematerializing into shadow and letting the connection that bound us catapult me forward in an instant, reappearing directly in front of her.

She slid to a halt with a startled cry. Then her eyes widened. “Nate! Behind you!” She brought her arm up in the next instant and fired. It all happened so fast, I didn’t even have time to turn around to see what she was shooting at. Or get the hell out of the way of the Jabberwocky’s deadliest weapon.

I dropped to my knees with a gasp a split second after dozens of poisoned quills pierced my back, the Jabberwocky’s venom working before I even felt the pain. But the agony wasn’t far behind. Tendrils of fire lanced through my nerve endings, wrapped their barbed arms around my chest and squeezed. I couldn’t breathe, could barely see.

I felt Tess’s cool hands on either side of my face as the world began to tilt precariously, and I thought I could hear her calling to me, but her voice was distant, faint. I managed to muster what little strength I had and forced my eyelids open. The face I adored swam before my eyes.

I wanted to tell her I wasn’t going anywhere, that I couldn’t because my legs had ceased to function. But my tongue apparently had gone AWOL as well. The venom from the quills of the Jabberwocky wasn’t going to kill me—nothing from the Make Believe or the Here and Now could. But it sure as shit could fuck with my head and was gonna hurt like a mother.

Tess’s face floated before me like some seriously jacked up kaleidoscope, making my stomach roll with the motion.

At least it’s not her, I told myself over and over as the venom constricted my veins, seizing my heart in its merciless grasp. At least Tess is safe.

And then I saw him. Or thought I did.

He was standing behind Tess, wearing a shit-eating grin that would’ve earned him a knuckle sandwich to chow on if I’d been able to move my arms. But all I could do was blink at him, not sure if he was a hallucination or the son of a bitch I’d once reported to in the Reaper Corp until he’d decided to take on a job that had better suited his particular talents.

“Nate!” Tess called to me, her voice edged with desperation.

I tried to drag my eyes away from Demetrius and his self-satisfied smile. Couldn’t. All I could do was stare, mute, as his shadowy form twisted and swirled around Tess, threatening to overtake her at any moment and drag her down into darkness.

And then I was falling. The ground was only a few inches away, but it felt like I was dropping toward it in slow motion from hundreds of feet in the air. And when my face smacked hard against the cold concrete, it jarred me like a sucker punch to the temple. For a split second my vision dimmed as I fought to stay conscious.

“This is Enforcer Little,” I heard Tess barking into her phone. “I have a man down. Send a medical team right away.”

I felt my heartbeat slowing, felt myself slipping away, and tried to find Tess’s face through the blur. She was leaning over me, smacking my cheek to rouse me. “Come on, Nate, hold on.”

Demetrius peered down at me from over her shoulder, his grin growing. He shook his head with a chuckle. “Oh, how the mighty have fallen,” he drawled, his high-pitched titter of a laugh sending a fresh wave of hell through my nerve endings. “I’ll let her have you today, Death Bringer. But soon, old friend, soon we will meet again. . . .”

The second he vanished, I gave in to the weight of my eyelids. I could hear Tess still calling to me, ordering me to keep it together, to fight off the poison, but I couldn’t. There was no defense against the inevitable. Eventually, death claimed us all. And I was no exception.

Vaughn Monroe (There I’ve Said It Again; I Wish I Didn’t Love You So*)

Red (pretty much ALL of their songs…)