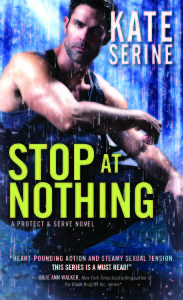 When a high-profile investigation goes wrong, FBI Agent Kyle Dawson is transferred back home where he is forced to confront his demons…and the only woman he ever loved. Three years ago, Kyle and Abby Morrow shared a wild, passionate summer—then Abby broke his heart.

NOW SHE NEEDS HIS HELP

Kyle never stopped loving Abby. So when Abby uncovers evidence of a human-trafficking ring, leading to her sister’s kidnapping, he swears he’ll stop at nothing to bring her sister home and keep Abby safe. Caught in a lethal game of cat and mouse and blindsided by their own explosive desires, they must set aside the past before it’s too late.

Praise for Stop at Nothing

“Packed with nonstop drama and sizzling romance, this debut novel in the Protect & Serve series will get hearts racing!” – RT Book Reviews, 4 Stars

“This is a great start to a new series and I really can’t wait to read more into the Dawson family in the future. SerRine has a new hit series with this one!” – Crystal’s Many Reviewers, 5 Stars

“[A] thrilling ride of passion, intrigue and turmoil… I will be awaiting the next book with enthusiasm.” – Paranormal Haven, 4 Stars

“The beginning of a sizzling series.” – Fresh Fiction

“I enjoyed Stop At Nothing so much that I read it in one sitting. Refreshing romantic suspense read that brings with it all the feels! I cannot wait to see who the next brother will be to fall in love, and capture the bad guy.” – The Reading Cave

Abby suppressed a shudder as that one word speared her straight through the heart. When Kyle Dawson had suddenly appeared in the doorway of her sister’s living room she thought she’d been hallucinating. After all, he was supposed to be in New Orleans last she’d heard. But there he was standing before her, coming to her when she most desperately longed for him, in a moment when her heart was aching more for him than it had in the three years that they’d been apart.

Kyle ducked down a little so that he was eye-level with her. “Abby?”

“I interrupted the intruder,” she explained, her gaze flitting briefly toward the Sheriff who’d looked skeptical from the start and was giving her the stink-eye even now. She cleared her throat a couple of times, before adding, “We scuffled. He got away.”

Kyle nodded, his eyes narrowed. “Was that before or after he cut the power to the house and managed to get by the alarm system?”

She should’ve known Kyle would see through her story. He seemed to have almost a sixth sense when it came to crime scenes. But the photo of Emma bound and gagged suddenly came to mind, and the anxiety for her sister took physical shape as a twisted knot of fear and dread in the pit of her stomach, concern for Emma’s safety preventing Abby from confiding in Kyle.

“Clearly, he’d done his homework and had been casing the place, watching for an opportunity to break in when the family was out of town,” she said.

That at least wasn’t a lie. The guy had been prepared. He’d known exactly what he was doing. And she’d hazard a guess that he’d also known Curtis was out of town and that Abby and Tyler were there alone.

Speaking of Curtis…Where the hell was he anyway?

“I’m sure Mac and the boys can handle it,” she interrupted, inwardly cringing with the knowledge that the reference to his father was a bit of a low-blow. But it had the desired effect.

“You heard the young lady,” Sheriff Dawson interjected. “Gentlemen—” he motioned to Gabe and Tom “—please escort Agent Dawson from the premises.”

Gabe took a step forward to obey his father’s order, but Tom put a restraining hand on his arm and shook his head.

“You look like you could use a little air,” Kyle said, gently but firmly taking hold of Abby’s elbow and leading her toward the doorway. She glanced over her shoulder at Tyler, reluctant to leave him after what they’d been through, but she saw Joe sitting beside him, chatting quietly to put the boy at ease.

Still, as great as it was to see Kyle, she wasn’t exactly eager to be alone with him again. Silence had a way of opening the door to some really uncomfortable questions that she wasn’t exactly ready to answer. And that didn’t even include the total bullshit she was feeding everyone about what had really transpired.

“Excuse me, agent,” came Mac’s booming voice. “If I failed to make myself clear earlier, I’m happy to repeat my polite decline of your assistance, but I can’t guarantee I’ll be wearing my happy face when I do it.”

“I said she needs some air,” Kyle snapped, his arm flailing in exasperation. “You want her passing out right here in the middle of the living room?”

“I have some additional questions for my deputy,” Mac replied, his tone calm in spite of the anger that flashed in his eyes. “And I would thank you not to interfere with my investigation, young man.”

Kyle lifted his free arm to his side and bent slightly at the waist, offering his father a mocking bow. “Wouldn’t dream of interfering, Sheriff.”

Before his father could offer another word, Kyle ushered Abby from the room and out the front door. Abby’s heart began to race as he led her farther into the growing darkness beyond the headlights and flashing blue and reds on the various vehicles.

Once they were out of earshot of any of the other officers, Kyle finally released her and turned to face her, hands on his hips. “Spill it. And don’t give me any bullshit about interrupting a robbery. I could hear some of what was going on. I know he was after something you have—or he thinks you have.”

Abby turned her head away, staring out into the darkness crowding in along the dense tree line that bordered the property. “I don’t know what you’re talking about. I told you what happened.”

Kyle grasped her chin and forced her gaze back to his. “Abby, it’s me. You could always talk to me.”

Standing there so close to him, within inches of being enveloped by his strong embrace and feeling safe and loved and protected once more, regret suddenly slammed into Abby so hard tears pricked the corners of her eyes.

Dear God, what had she done by letting him go?

She’d walked away from the love of her life, the man who’d made her feel more than anyone ever had before or since. Instead of embracing the love he’d offered, she’d thrown it back in his face, declared she could never love him, had intentionally broken his heart, thinking it would save him heartache in the long-run.

And the really shitty thing about it all? It’d all been a lie. A lie so heinous it had broken her own heart to utter it.

But she knew if she’d confessed that she was head over heels in love with him he never would’ve left to pursue his dreams. And eventually he would’ve grown to resent her for holding him back. She’d grown up in a household filled with that kind of bitterness and there was no way she’d live like that again. Better to die old and alone.

And yet here he was, his black brows drawn together in a frown, the already angular planes of his face even harsher in his distress, those intense sapphire blue eyes showing the depth of his concern as he searched her gaze. How could he be so kind after all she’d put him through, so caring when she was the one who’d pushed him away?

She wished like hell that they could pick up where they’d left off and pretend she’d never been such an indescribable idiot. But that part of her life was over. She’d missed her chance at happiness with Kyle and had to accept the fact.

Of course, that didn’t keep her from wanting to kiss him so badly at that moment that she began to tremble with the intensity of that desire.

Apparently, Kyle mistook her trembling, for his gaze softened, and he took her face in his hands. “Sweetheart, please talk to me. Let me help you.”

Abby closed her eyes, focusing on the way her skin tingled beneath the gentle pressure of his fingertips. “I can’t.”

“Why? Because of Mac?” Kyle demanded. “Screw him. You called me. I came. This is between you and me.”

She shook her head as much as his tender grasp would allow. “It has nothing to do with Mac.”

“Then what?” he pushed. She could feel his entire body tensing as if he was steeling himself. And then his hands fell away from her. “Is it because of what happened between us?”

She opened her eyes and met his gaze, her hands reflexively coming up to rest upon his chest. “Oh, Kyle…” God, the pain she saw in his eyes just then was killing her. “No. It has nothing to do with us. If anything…” Her words trailed off as she considered her words, torn between revealing any of her true feelings and giving him false hope or letting him continue to think he’d never meant anything to her. She absently fiddled with the button on his blue and black plaid button-down, suddenly getting the insane urge to pop it open and get to the toned pecs she knew to be beneath the material. She dragged her gaze up to his, settling for her typical avoidance maneuver. “It’s complicated.”

His brow lifted, totally on to her. “Well, I figure if it was simple you would’ve already come clean with Mac. So tell me something I don’t know.”

She turned away and strode a couple of paces. “Kyle, I just can’t.”

“Bullshit!” he snapped, charging after her. “You called me here, Abby. If you didn’t want—”

Abby spun around to face him her arms spread wide. “If I tell you, my sister will die!”

The One That Got Away (The Civil Wars)

Come With Me Now (KONGOS)

Born to Be Wild (Steppenwolf)