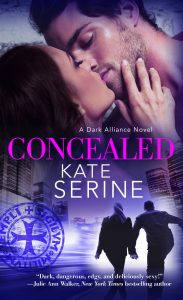 As the only female initiate of the elite undercover society, the Dark Alliance, former FBI agent Madeleine Blake has a lot to prove—especially to her former lover, Alliance operative Jack Grayson. Ever since joining Jack’s team, Maddie’s been keeping her distance, trying not to relive every moment they shared during their brief but passionate affair. Yet when a mission ends in tragedy, Maddie’s ready to walk away from the Alliance—and Jack—forever. That is, until Jack’s cover is blown, putting his life in danger and making it impossible for Maddie to deny her true feelings…

Before he met Maddie, Jack Grayson thought happiness was impossible for a man like him. After all, he has a price on his head that requires him to live in the shadows, concealed from everyone and everything he cares about. But now that they’re on the run for their lives and Jack has Maddie in his arms again, he realizes their love is the only thing in his life that’s real. And this time, there’s no way in hell he’s letting it slip away…

**Selected as one of Amazon’s Best Books of the Month in Romance!**

“[F]ans of this series and newcomers alike will find plenty to enjoy in this high-stakes, fast-paced, and perfectly sizzling adventure.”- RT Book Reviews, 4 Stars

“SeRine’s fans are certain to enjoy this one.” – Publishers Weekly

“An entertaining and enchanting story with merciless action, relentless danger,  a brotherhood that leaves no man behind, and tender loving and adoration that made me sigh.” — Books and Spoons

Praise for the Dark Alliance series

“A rising star in romantic suspense, Kate SeRine combines action and romance to deliver a dark and sensual story that will keep readers turning the pages. Deceived is must-read.” –Cecy Robson, 2016 Double-Nominated RITA® Finalist for Once Pure and Once Kissed

“A fabulous kick off to the new Dark Alliance series by the always imaginative Ms. SeRine!” — The Romance Reviews (Top Pick)

“This sexually-charged, action-packed romantic thriller is the introduction to an intriguing series sure to wow not only romance lovers, but suspense, mystery, and thrill seekers as well!” –Happy Ever After Romance Book Reviews

“I love action-packed and well-written suspense and Ms. SeRine brings it in spades. . .It’s high octane action from the very beginning.” –The Sassy Bookster

“This book has it all . . . mystery, suspense, romance, and danger. It had me sitting on the edge of my seat.” –Behind Closed Doors

“Romantic suspense at its finest.” –The Book Junkie Reads

His brows came together. “Sorry?”

She opened her eyes at this and allowed her hands to smooth tenderly over his bare skin, over his shoulders, across his chest. “I want you, Jack,” she told him. “My God, I want you. But I don’t want to just fall back into bed with you. It’s far too easy to slide into our old pattern. It’s not fair to use you just to satisfy my libido.”

He caressed her cheek with the back of his fingers. “Really? That would be such a terrible thing?”

She shook her head. “No. It would be beautiful and thrilling and amazing—just like it was before. But, ultimately, heartbreaking. At least, that’s my fear. That seems to be our track record.”

“I can’t promise you that we’d live happily ever after, Maddie,” he admitted even as he realized that’s exactly what he wanted. He could easily picture them growing old together. And never once in his life had he thought of himself as a father, but when he looked at Maddie, he could imagine a future that included the kind of happiness he’d never dared to dream of. But that was his dream. He wasn’t sure if it was hers. And he sure as hell wasn’t going to allow himself to hope for anything beyond the moment.

As difficult as it was to leave the warmth of Maddie’s arms, Jack eased off of her and pulled on his shirt. He grabbed his laptop and turned back toward the bed to see Maddie still lying on her back, the heels of her palms pressed against her eyes. It pained him to leave her, but she clearly had reservations about going further, and he knew if he stayed, they’d be right back where they’d left off. And the thought of her regretting being with him was far more painful than the raging hard-on he was sporting.

He headed toward the bedroom door but paused. “I honestly don’t know what the future holds,” he told her. “But I know I will always want you, Maddie. Always.”

In This Moment (Big Bad Wolf)

Halestorm (I Am The Fire)

Mazzy Star (Fade Into You)

The Kills (Doing It To Death)