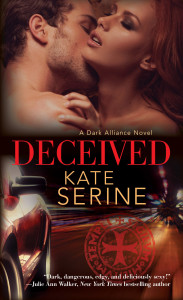 Luke Rogan’s assignment is simple: secure young Elijah Scoffield and his mother and bring them back to headquarters–just an ordinary mission for an operative of the Dark Alliance. But Elijah is no ordinary kid. He’s the grandson of one of the country’s most influential politicians–a man privy to the Alliance’s most valuable secrets, including its centuries-long connection to the Knights Templar. And someone else is attempting to capture the boy–someone who’s proven he doesn’t give a damn about collateral damage. . .

Heartbroken at the lies that tore her world apart, Sarah Scoffield will do anything to protect her son–even if that means teaming up with a deadly stranger. But Sarah soon finds herself falling in love with her dark hero. And as danger stalks ever closer, the fiery desire that claims them awakens in Sarah passions she’d thought dead and buried long ago. . .

“SeRine kicks off an action — and secrets-packed new series featuring a centuries-old conflict.  The Dark Alliance traces it’s roots to the Knights Templar of the Middle Ages, and although their leaders deny it, their foes, the illuminati, are rising.  Packed with plenty of secrets, lies, passion and danger, SeRine takes her lucky readers on a nonstop thrill ride!”  – RT Book Reviews

“A rising star in romantic suspense, Kate SeRine combines action and romance to deliver a dark and sensual story that will keep readers turning the pages. Deceived is must-read.” – Cecy Robson, 2016 Double-Nominated RITA® Finalist for ONCE PURE and ONCE KISSED.

“A fabulous kick off to the new Dark Alliance series by the always imaginative Ms. SeRine!” — The Romance Reviews (Top Pick)

“This sexually-charged, action-packed romantic thriller is the introduction to an intriguing series sure to wow not only romance lovers, but suspense, mystery, and thrill seekers as well!” –Happy Ever After Romance Book Reviews

“I love action-packed and well-written suspense and Ms. SeRine brings it in spades. . .It’s high octane action from the very beginning.” –The Sassy Bookster

“This book has it all . . . mystery, suspense, romance, and danger. It had me sitting on the edge of my seat.” –Behind Closed Doors

“Romantic suspense at its finest.” –The Book Junkie Reads

“I thought we were safe here,” Sarah said, her arms crossed over her chest.

“We’re as safe here as anywhere until we get to my place,” Luke assured her.

She lifted a brow. “Yet you’re acting like you expect someone to come barging in and attack us at any moment.”

He took a step closer and immediately realized his mistake when his heart started pounding at the nearness of her. Shit. He shoved his hands into his pockets to keep from touching her. “If being paranoid is what’s going to keep you and your son alive,” he said, “then guilty as charged.”

“Please don’t take this the wrong way, Luke,” she began, edging closer, damn it all, “but why does it matter so much to you if Eli and I are safe? You don’t know us. I get that you’ve been given an order, but I also heard you talking to your commander and know you’d rather be somewhere else. If you’d insisted that someone else watch over us, I would’ve understood. I can just go to the police, tell them what happened. I’m sure it’ll be fine.”

Luke stared at her for a long moment, trying to figure out the answer to her question. Hell if he knew why it mattered so much to him that he keep them safe. In the technical sense, he protected people every day and had for going on fifteen years when he added up his time in the military and then working for the government and now with the Alliance. But she was right—this assignment was hitting him on a level he hadn’t anticipated.

“I guess because, when I wasn’t much older than Eli, someone took my mother and me in, watched over us when we needed it,” he finally said, not sure where the explanation was even coming from. “And someone else did the same thing for me again a few years ago when I was in a really dark place—except this time the enemy I was up against was myself. If it wasn’t for that person stepping in, I don’t know where I’d be. But dead is a damned good bet.”

“Don’t be,” Luke told her. He shook his head as his vision went a little blurry. Suddenly too tired to stand, he leaned against the edge of the sink. “I made a promise to keep you and Eli safe, Sarah. I’ll keep it. There’s no way I’d abandon you, so don’t worry about it.”

The next thing he knew, Sarah’s arms were around his neck, hugging him tightly. He resisted the urge to wrap his arms around her and hold her close, to bury his face in her hair and let the warmth of her wash over him. But when she pressed a kiss to his cheek and whispered, “Thank you,” in his ear, he almost gave in.

Fortunately, before he could move, she stepped away and hurried back into the room with Eli, leaving Luke gaping at the empty doorway and wondering exactly what the hell he’d gotten himself into…

Rage Against the Machine (Killing in the Name)

Puscifer (The Mission: ‘M is for Mila Mix’)

Sarah Jarosz (Build Me up from Bones)

Yiruma (*River Flows in You)

Lorde (Everybody Wants to Rule the World)