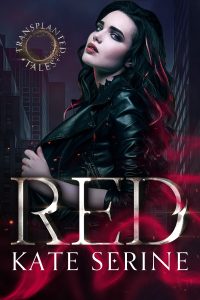 Once upon a time, a spell went awry, stranding Make Believe characters in the ordinary world. Since then, Tess “Red” Little—a/k/a Little Red Riding Hood—has worked as an Enforcer for the Chicago branch of the Fairytale Management Authority. But, consider yourself warned—she’s not just some waif with a basket of goodies. All grown up and with nothing to lose, a gun and combat boots is more her style. And Red’s new assignment threatens to be short on happily ever afters…

What do you get when you cross an egomaniacal fairy godmother, an arrogant genie, and a couple of wandering plagiarists whose idea of cultural preservation is stealing the stories of unsuspecting villagers and passing them off as their own?

If I were tossing back a few shots of Goose with the guys at Ever Afters, I might chuckle at such an intriguing setup for what has all the promise of a hilarious punch line—except the punch line of this little beauty isn’t funny at all. ’Cause what you get, my friend, is a pissing contest of epic proportions.

Imagine two individuals with almost limitless power, one-upping each other in an effort to prove whose story is the most exciting and thereby win top billing in the aforementioned compilation of plagiarized tales. When magic starts flying, you never know how the story’s going to end even on a good day, but toss in a couple of giant egos and one very bored socialite cheering them on for her own amusement, and, well, you know disaster’s coming.

Although supporters and detractors of each side still hotly debate which party was actually responsible, the result is irrefutable: nearly two hundred years ago, a spell gone awry cast the characters from the land of Make Believe into the world of Here and Now, leaving us to fend for ourselves in an unfamiliar place with unfamiliar realities.

Some of us adjusted and blended in without too much trouble, living among you as perfectly assimilated and productive members of society. Others . . . well, others of us didn’t make the transition so easily and still need a hand now and then. And another stubborn few didn’t learn a damn thing from the moral of their own stories and have made it their personal mission to exploit and corrupt on this side.

That’s where I come in.

When the Fairytale Management Authority, or FMA, has a problem, they call me. I’m an Enforcer—and a damned good one. You might know me by my fairytale moniker of Little Red Riding Hood. But make no mistake, I’m no longer a kid and I ditched the hood when I was twelve—which was long before my little encounter with the wolf, by the way.

Unfortunately, the nickname stuck and followed me into the Here and Now, giving my brethren with more imposing and creative Tale names the mistaken impression they can push me around—that is, until they pop off one too many times and end up meeting the business end of my fist. Then they know I’m not the sweet little gal with the basket of goodies they’ve read about.

My name is Tess Little. But everyone calls me Red.

I am a huge music fan and always have something playing in the background while I write in order to help get me in the right frame of mind for the kind of scene I’m working on.

If you’d like to know what was on my playlist while I was working on my Transplanted Tales, check out a few of the artists listed below by visiting your favorite streaming music site or at places like iTunes where you can listen to a sample and purchase songs you like.

Suicide Commando (Bleed for Us All)